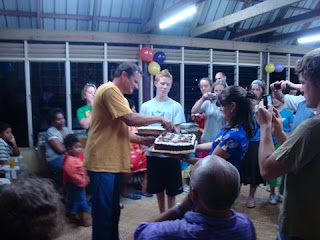 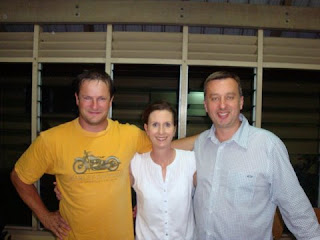 Steve with Peter and Jill
(nice to see since I haven't seen him in a while!)
We had a good road trip recently! The kids did great in the car for most of the 3300 miles. We got to see lots of people dear to me, some of whom I hadn't seen in over 20 years. We enjoyed the time with Terry's family and also with my home fellowship in Midland, TX.

On our way back to AZ we stopped at Carlsbad Caverns. One thing we did that I had never experienced there before was to watch the nightly 'Bat Flight' as hundreds of thousands of bats leave the caves to hunt at dusk. Before the bats came out a park ranger was giving a talk with information on the bats. One thing he mentioned was that as soon as a bat is born it automatically clings to the roof of the cave because clinging to the rock is how the bat is most at rest. I've been enjoying that mental image lately in relation to how secure and at peace we are clinging to our Father!
Steve left for Fiji right after our return. He's been doing well there although we're all missing each other heaps. It was very sweet at the airport to see how much the kids didn't want to see him go as well! 'Dad' has been very good to us so far in our 'bonding time' and we've made much progress.
The other night the teams in Fiji as well as all of Steve's friends around Suva gave him a surprise party since this will be his last trip with his former organization in New Zealand (pictures above). The end of an era! Peter and Jill Schultz who are dear friends of mine as well sent a couple of pictures of the event. Jill said that they knew Steve was a great guy but it reminded them just how fantastic he is to hear all of the nice things said about him by people who have known him for years. :-)
Steve will be gone for a couple more weeks. He's staying a bit of extra time to do some repairs on the house in Suva since nothing has been done to it since I moved out over two years ago! It's still not a good time to sell in Fiji so we're blessed to have two 'M' ladies from New Zealand living there currently.
Posted by Steve and Heather Pound at 11:55 PM No comments: Links to this post