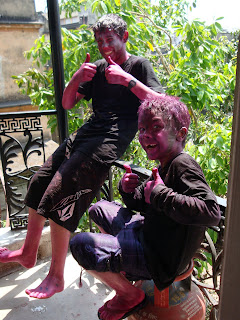 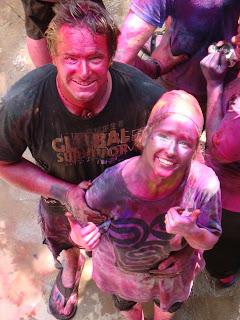 Today is Holi. In our city it's become just a fun day of going into the streets with colored power mixed with water and throwing or spraying it all over each other! Sounds strange, I know, but apparently it's pretty fun. (So they tell me because I haven't done it myself! Neither has Rachel. We are possibly the only truly sane ones in the family!)
The rest of the family has now bathed, but let me tell you it wasn't a vast improvement! They'll work on bettering themselves a bit more tonight, but I anticipate getting helpful comments from random people for the next week of how to get the color off. And our family will probably try them!
The local population looks pretty normal in a few days but fairer skin takes longer. And fairer hair a LOT longer! Hannah loves to 'play Holi' but wore a swimming cap this year. Last year it took about 4 months for the pink and purple to mostly fade! 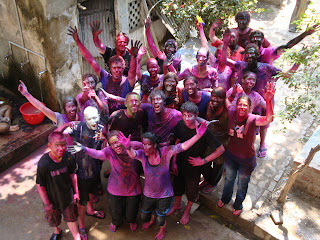 The crazy crew of foreign people that we work with and short-term volunteers who 'played'. The one bright spot near the front isn't a clean person who jumped in the picture. He somehow ended up metallic silver instead!
Posted by Heather at 1:11 PM No comments:

"I am weary, O G-d;
I am weary and worn out, O G-d.
I am too stupid to be human,
and I lack common sense.
I have not mastered human wisdom,
nor do I know the Holy One."
Prov. 30:1-3 (NLT)
Do you ever feel like this? I do sometimes! Too often, really.
I have a weekly chore of cleaning the cobwebs out of our house. Yes, it's a weekly chore around here! No matter how clean I have it, by the end of the week sticky, grey strings and webs have moved into the corners and crevices with a coat of dust settled on top.
That's like our hearts, too. As clean as we may have them sometimes they can get cobwebs in the corners just by existing. It would be easier if life were lived in a vacuum. Where we could clean out our hearts, make everything right with the Father and then just cruise along. But that's not the way it is. Life happens! Things filter in and affect our hearts.
Too much busyness and not enough time with Him? Cobwebs. Little irritations, hurts, and resentments that don't seem significant on their own but add up? More sticky stringy stuff. Small choices to do what's easy over what we know is right? Dust settling in. Selfishness or even selflessness with wrong motives? It's getting crowded in the corners! Time to clean again.
When my heart is clean and cobweb free I never feel like the verses above!
Posted by Heather at 9:42 AM No comments:

Yesterday morning Steve was in one of the old Ambassador taxis that clog the streets of the city where we live. Out of the corner of his eye as he passed a street he saw something really disturbing, a woman around 20 years old running down the road completely naked with a crowd looking on. That is something that would be startling enough in our home cultures, but here where modesty is extreme by western standards it's a sign of something deeply wrong. Before he could react his taxi had zipped along and was caught up in the traffic ahead.
From books and newspaper articles I've read and stories I've heard about this part of the world a scenario quickly forms in my mind:
Public nudity here, especially for a female, is probably meant for the purpose of deep, profound shame. There are stories of girls falling in love with someone that her family or community doesn't approve of and being paraded around nude as punishment. It doesn't even mean that any sort of relationship happened between the couple, just that it was considered. There are lots of possible reasons, but most of them probably involve the girl being considered somehow immoral.
Also acutely alarming is that she had probably already been subjected to some form of molestation or rape as her real shame. The walking around might be to make others aware of what had happened more privately to her as the 'culprit' and enhance her shameful feelings.
What was done to to her would linger long in the minds and on the tongues of the members of her community who witnessed it and the feelings of humiliation would go on and on. Unless her family was not involved and gathered around her to be supportive after and unless she was already a product of the sex trade, there is a statistically probable outcome....that she would then be ashamed enough to kill herself.
I am theorizing here and have no idea what happened to that particular girl. I hope I'm wrong. We routinely see situations of injustice and as foreigners have to wade through the tricky waters of quickly deciding 'What should I do?' when far too often there's not much to be done because as outsiders we'd likely make it worse for the targeted person in the long run. Steve by himself trying to grab a naked women even if to help her would be incredibly culturally taboo. It would incite rage in an even larger crowd which would probably later be turned back on the girl as the one who 'started the problem'. There just aren't easy solutions. And in our western thinking we can easily make wrong assumptions to start with.
In a city so full of needs you have to know what your focus is. Even though it's confusing, we're glad that we're here and glad that we get to be part of something that does provide freedom and brings about change. Because in our area young girls are shamed, abused, dehumanized, and abandoned every day.
Note: I've been reading the book "Half the Sky" by Kristof and WuDunn who are secular journalists. It's a very good overview not only of trafficking and modern day slavery around the world but it covers other women's issues as well. I don't agree with all of their conclusions, but they have a lot of valuable insights.
Posted by Heather at 10:08 PM No comments: