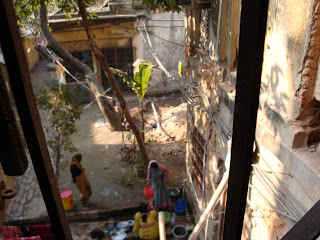 I've been enjoying watching the community life that goes on outside of our window. People that live nearby hang out in the courtyard at least a couple of times a day when the water comes on and the common tap that supplies water begins to flow (ours gets pumped to a tank on the roof during these times). It's been fun to observe their individual personalities, hear the clinking and clanging of pots and pans, the chatting and laughter.
There are arguments, too. Sometimes quite heated. But before too long it goes back to the general sharing of lives, teasing, and playfulness.
You see, while they represent different personalities, families, types of employment, etc, they have to work it out and get along. Because they all share the same source of water!
I've been learning a lot about fellowship in the Body as well since we live in close community with co-workers here. They are an awesome group of people and we get along really well, but in a practical way it's brought Rom 12: 9-18 to life. Words like, "Don't just pretend to love others. Really love them," takes on a deeper meaning when you're around 'them' 24-7 while overheated and overworked. "Do things in such a way that everyone can see you are honorable," when the 20 women from the T-shirt unit upstairs walk past my open door numerous times a day and can easily assess the atmosphere of what's going on in our home.
It challenges me about how to live that way in a broader perspective, too. We are all so different; have different goals, dreams, callings on our lives, preferences, things we do or don't enjoy-----but we really SHOULD to get along.
Why? WE share the same Source of Water, too.
Posted by Heather at 8:26 PM No comments:

Someone who was just here on a visiting team took some fantastic photos and has given me permission to use them over time. (Thanks, Frin!) Here are a few:
Men doing manual labor jobs. 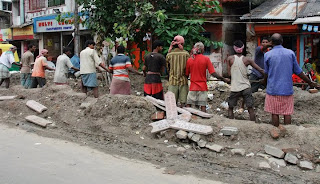 Laying some kind of cable?
I wonder if these are all workers or guys who just decided to jump in and lend a hand. You can be SURE that this amount of men weren't involved in tearing up the street before this! 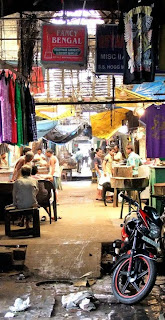 The meat market which is the only place to find beef.
There are tables to butcher on and stuff hanging everywhere. I have a guy's phone number. I call and tell him what I want, quickly pay, grab my bags, and leave. All while trying to breathe as little as possible! 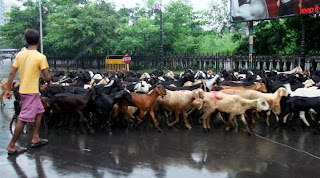 Yes, this is in the middle of the city with heavy traffic around!
These animals will wind up in a meat market by the next day. 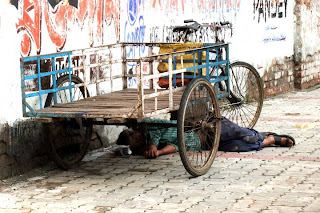 Even though he's taking a rest this guy would work HARD!
We have seen amazing, heavy loads balanced on the back of these. 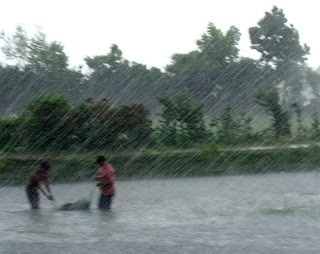 Don't let the monsoon slow you down! 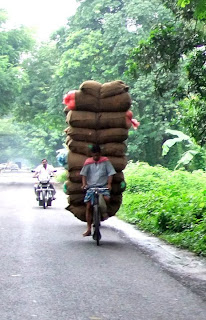 My personal favorite.........
(No photo shopping involved! And this is without the trailer that the guy above has on his bike.)
Side note:
I've been helping with painting on our soon-to-be finished (!) flat. The other day I was up on a ladder painting when Steve brought some men to install a converter (Which will store up power so we can run a few fans, etc, when the power goes off. Notice that I didn't use the word 'if'!). Steve left to get something while I was openly stared at by these guys with too little personal space involved for my cultural tastes. What I was doing was highly unusual behavior for a women here. I thought, "I wonder how long they can stand just watching and not give me advice?" They didn't disappoint! About 20 seconds later they began informing me of spots they thought I hadn't done well, that I needed to thin the paint with water, etc, etc, etc!
(I actually didn't mind too much, though, because they weren't speaking in English----and I understood them! Very nice when that sometimes happens now.)
Posted by Heather at 10:00 AM No comments:

Precious in His Image 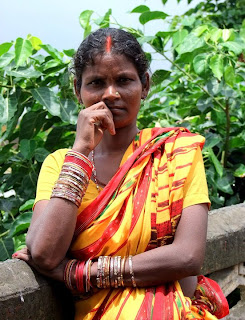 Yesterday as I rode the subway to pick up the kids from school a women got on who wasn't as well dressed as the rest of the middle class riding the rails. She looked a little frantic at the obviously new experience and since all of the seats were full, hung on to the overhead rail for dear life. Since she was barely tall enough to reach the rail, I decided to get up and give her my seat. I hesitated for just a second as I adjusted my bags and another seat became available.
The 'lower class' lady sat down, but the ladies on either side of her weren't pleased. In fact, one of them got up and moved seats at the next stop clearly to avoid sitting next to her. The lady on the other side slid as far away as possible.
I cringed. Partly for the sake of the lady who was rejected (although she's probably used to being treated that way by people above her 'class') and partly because she looked a lot like the ladies that we have around us every day.
Things like this are a good reminder that every person is precious and worthwhile. I think it's easier for me to see that here because I haven't grown up with the same class system, everything is unfamiliar, and people just look like people to me.
I hope in my own country that I wouldn't be the one to move away.....
Posted by Heather at 4:12 PM No comments: 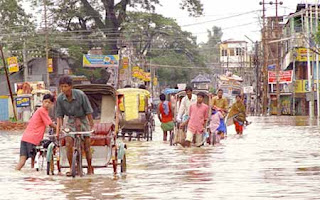 It's monsoon season here but this year has had much less rain than usual and higher humidity than normal. Today, however, the heavens opened and we got to experience our first flooding. After only an hour or so of torrential rain there was no way to get home from the subway without walking through 10 inches or so of water! And a couple of hours later the water was completely gone.
This picture's not of our area but shows the kind of thing that can suddenly occur.
The saying, "like a drowned rat," took on a whole new meaning for me today as the sewers and storm drains overflowed. But I won't go into detail!
Posted by Heather at 10:08 PM No comments: 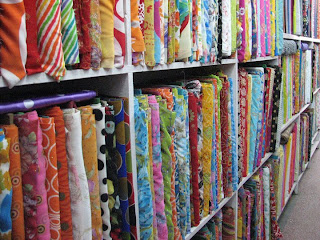 These picture so depict things that are important to women here. There's not much of a ran 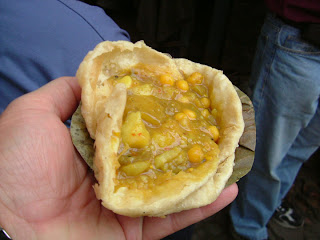 ge in styles of women's clothes but the fabrics themselves are so important. In most shops clothes are grouped by color and fabric. You choose that first and THEN the cut of the garment. Different colors are everywhere and looking down the street at a group of women is like looking at a garden of flowers.
Another thing central to the lives of women is making food. Most of the cooking is done in the morning and the larger meal is eaten at lunchtime. I get asked every day by the women who work with us what I've cooked for lunch. They think it's amazingly boring that my response always has something to do with bread, as in a sandwich. I must be letting my husband starve!
(Photos by Shelley West)
Posted by Heather at 12:04 PM No comments: 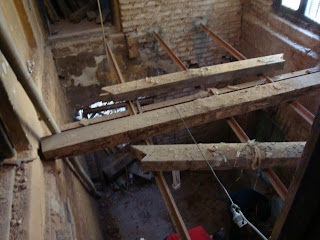 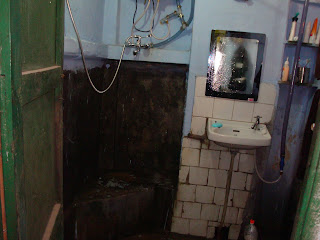 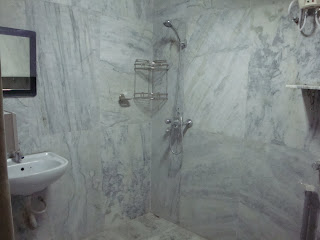 You've been asking for photos of the progress on our new home. It will still be at least a month before we can move in but it's come a looooong ways! The pictures are:
1. Just a reminder what our new bathroom and kitchen looked like when we got here----they were empty holes in the floor! This is now the new bathroom and the kitchen is on the floor above.
2. The shower where we're living now.
3. Shower in the new place! Yes, that's marble. Pretty isn't it? It's cheaper than wood is here!
4. Our current kitchen.
5. Progress on our new kitchen as of last night. Still a few things to be done and the walls need to be painted. Can't wait to cook here! The picture is taken from the living room which is only about the size of the kitchen, but the whole room together feels airy and spacious enough. 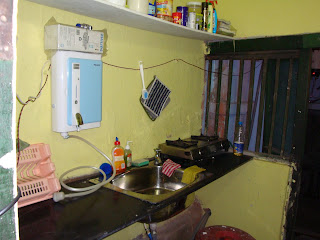 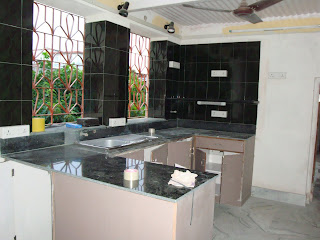 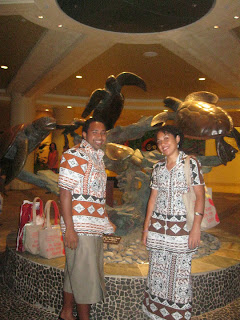 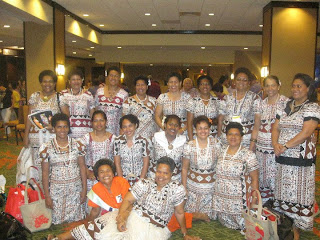 FS was hired to make the bags for an International conference held in Hawaii last week. Everyone who participated was given a bag. Here are a couple of photos of something VERY special to us. People that we know and love like family from Fiji at the conference----with their bags made by the women that we are beginning to love like family here!
Posted by Heather at 4:14 PM No comments: