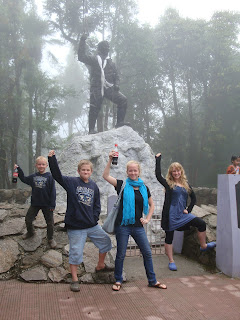 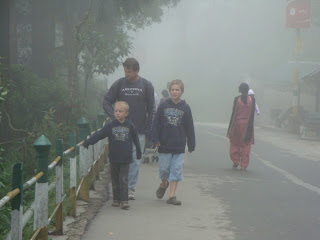 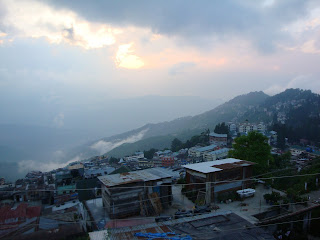 We just got back from a wonderful break in the cool mountains of Darjeeling! Our city apparently had the hottest four days of the summer while we were away and we were not sad to miss them.
It was a wonderful time of hanging out as a family, seeing the sights, enjoying beautiful scenery, and getting perspective on our first six months here. We've come a long ways!
This time of the year the mist is pretty constant in Darjeeling (we literally walked in the clouds!) but on one of our last days it rolled back for a few minutes just enough for us to see the top of Kanjanjunga, the third highest peak in the world, and the surroundings mountains. It was an amazing sight! We were already at 7000 ft. but felt absolutely dwarfed by the peak over 21,000 ft. higher.
The statue the kids are posing by is of Tenzing Norgay, the sherpa who conquered Mt. Everst with Sir Edmund Hiliary (a New Zealander!). Steve's mum met Tenzing many years ago and Steve ran into Sir Edmund in an airport once before his death. We enjoyed seeing the museum in Darjeeling that documented the events of many Everest attempts.
The boys especially loved playing with the street dogs that hung around the city square (oval?). The animals were cared for by an NGO and were healthy and friendly, much different than the disease fill street animals where we live! The boys apparently drew the attention of others since pictures of them petting dogs came out in two different area newspapers!
Now it's back to school on Monday for the kids as they start their new school year. Heather's off to the States for a couple of weeks later today where she'll be doing a bit of speaking and attending a conference to communicate about FS. Back to work for Steve--as well as being Mr. Mom for the next couple of weeks!
Posted by Heather at 11:35 AM No comments: