Sheep and the Shepherd

We've had a really fun experience recently of hand raising an abandoned lamb. For lots of New Zealander's lambs are nothing new but for this partly American family it was an awful lot of fun--especially since she slept happily in the garage through the night so there were no night feeds involved!

Steve thought 'Chops' or 'Mint Sauce' would be great name choices for her but Adam would have none of that!  A happy medium for our current house full of mostly males who love cars was "Lambaahgini" (emphasis on the 'baah'!) Lambaah for short.

We fed and enjoyed her for 2 1/2 weeks (she even went to Adam's soccer game once!) but then since at three weeks she really needed to start eating good grass, she went to live with friends who had more grass and also a little lamb who was getting lonely of their own.  But she still remembers us when we stop for a visit and runs to the gate baaaahhhing to see us.

Steve and I both have found ourselves thinking a lot about sheep and shepherds.  The absolute dependence of the sheep.  The devotion of the shepherd.

The Lord is my shepherd;
I have all that I need.
2
He lets me rest in green meadows;
he leads me beside peaceful streams.

3
He renews my strength.

He guides me along right paths,
bringing honor to his name.

4
Even when I walk
through the darkest valley,
I will not be afraid,
for you are close beside me.

Your rod and your staff
protect and comfort me.
5
You prepare a feast for me
in the presence of my enemies.

You honor me by anointing my head with oil.
My cup overflows with blessings.
6

Surely your goodness and unfailing love will pursue me
all the days of my life,
and I will live in the house of the Lord...... 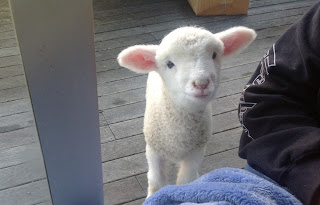 When he saw the crowds, he had compassion on them because they were confused and helpless, like sheep without a shepherd.  ~Matthew 9:36

I just read a post by someone on Facebook who has made a friend and in the process of that has just gone to see the friend's mosque with her.  My instant response was, "Awesome!  Good on her for doing that!"  Having lived cross-culturally for so long in the middle of other religions, it thrills me to see people going out of their comfort zone to pursue a friendship like that.  I love seeing people who are confident enough in what they believe that they are not threatened by others, and who care enough to truly reach out with their time, energies, and be vulnerable to pursue a friendship like that.  We want people to be interested in OUR ways but how are they going to if we don't show respect and interest in THEIR most cherished things?

My thought processes went on to why we sometimes back off from friendships like that, from people who are different from us.  Not necessarily religion but socioeconomically, culturally, racially.  I think for parents sometimes the initial response is being protective of our children. To be friends eventually our kids will play with theirs and do we want that?

This has been a challenge for me for my kids' whole lives. I've had to evaluate the in's and out's of who they can play with and what the boundaries on the relationship are.  A lot.  What's really important?  What's preference and what's vital for the protection, maturity level, etc, of my child?

I've made some good choices and I've made some not so good ones.  My kids have seen lots of contrast. They know things about the world at large that my mother's heart wishes I could have just protected them from.  They've had to grapple with disturbing, mind-bending concepts way 'too young'.

But what's really best?  I've never bought into the philosophy that we just protect our kids, only show them the real so that later they'll 'recognize' the counterfeit.  No, I believe that we are called to be Ambassadors. Ambassadors can't only live separately. They must be part of the environment where they are.  Our kids need to be given experiences along the way that are counter to the culture that we want them to embrace so they learn how to be ambassadors in the foreign land of 'other.'  So they can walk confidently in who they are and be a real contrast to the world around them---not gobsmacked in the face by the difference when they reach adulthood and find themselves in culture shock and not knowing how to respond.  We don't toss them to the wolves as they grow either, but give them doses of and training throughout their childhood.

Yet I've discovered along the way that despite my best intentions, that my children have seen and experienced things that I wish they hadn't as well. Things that went well beyond the small doses that I wanted.  Things that they're having to process and, yes, even heal from now.

We just don't live in an ideal world whatever our ideals may be.  And sometimes in the Third World that's even more 'in your face' and doesn't even pretend to be polite.

This has been our journey. Our 'price' for the life we've lived.  I don't think we've 'sacrificed' our kids in the process----but there have definitely been sacrifices.

This leads right into my second "what I would like to tell my younger self" post.  And that's that........OUR CHILDREN ARE NOT OUR OWN.

I remember the first time I held my tiny little Hannah.  It was a bit delayed since she was an emergency C-section and I didn't really get to hold her until the next day.

I had never seen anything so precious!  And I fell in love.

I wanted to protect her and keep her safe.  But at nine days old she was back in the hospital with a huge IV in her tiny little arm.  In fact, each one of my children had something with their health at the beginning of their lives that made me give them back to God.

Beth Moore blogged recently about the death of Rick Warren's son, "Nothing tries our faith like the suffering of our children.  At the end of the day, our faith is what the devil is after most.  Without it, it's impossible to please God!"  Nothing can tear at a parent's heart quite like the suffering or troubles of their children.

Our children are gifts for a season.  And one of the hardest challenges in life is giving them back to God. 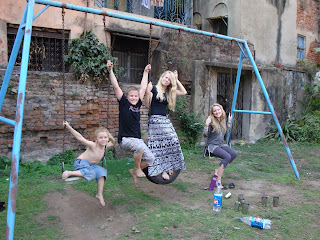 I had an experience a couple of years ago where I was doing dishes at my sink in my Third World home.  One of our children was really struggling and I found myself evaluating the cost involved in our then situation. I found myself thinking, "There are a LOT of things I'm willing to sacrifice for you God, but I will NOT sacrifice my children."

Instantly Abraham and Isaac came to mind.  Oops!  I remembered that He MAY ask us to 'sacrifice' our children in ways we don't understand.  (full story here:  Dishwater Surrender ) I had to give my child into his loving hands that day and ask for the 'ram' in their life. Ultimately our children aren't 'ours.' They're His.  And He can do a lot better job with them than we can.  (But that doesn't mean I wouldn't still throw myself in front of a train for any of my kids!)

A while back I was really concerned about one of our children and was given this verse of encouragement:

I will always need to keep giving them to God.  My intentions have been good, my heart has been loving, yet both my decisions and circumstances certainly haven't been perfect.  (But perhaps 'perfectly' what He wanted for their lives???) I have had many joys watching them grow, but have regrets as well.  Yet, whatever He has allowed to happen or will still happen in the future, He is in control for His particular plans for them.  And He is good.

Any my kids are pretty awesome people as well!
Posted by Heather at 11:15 AM