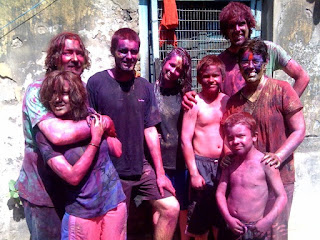 Today is called 'Holi' here. It's a day with religious roots somewhere back there but no one is too clear about the meaning today. Basically it's a chance to have a day off and to play! Playing takes on a new meaning, however, when the method involved is to first throw handfuls of brightly colored powder at someone and then squirt water over the person you've just 'played with'. Or an alternative method is to mix powder and water in your hand and toss the whole whammy at once. The outcome either way=very bright, very hard to wash off PAINT!

We've had quite a bit of deliberation in the past week as to how our family was going to respond to the day. We finally decided 'to each his/her own.' After all the paint is said to come off completely in a week or so. And we've only heard ONE report of blond hair taking three months to right itself....

Rachel's getting over being sick so that made up her mind for her. Steve and I weren't too keen to play actually, but Steve got his face and hands done up by K. when he went down to take the picture! Our other three? See if you can pick them out of the crowd! And, no, that's not an overexposed photo. They really are mostly a weird, bright purplie pink!!! It's much brighter than it looks in the photo. And they don't look too much better yet after a shower.

Experiencing the culture at it's best?! (They actually had a blast!)
Posted by Heather at 2:16 PM No comments:

There are a number of Metro stations around the city that can only be exited by escalators. We often smile at people who obviously have little or no experience with them, however! People seem to put their hands out first to grip the rails only to find that they're being pulled up and are forced to stumble onto the steps.

Yesterday I was behind a young man in this very situation and what I wanted to say (but couldn't think quickly how to say it in his language) was, "Just step out." It got me thinking. I've been using escalators my whole life. I have no fear of them. I know that when I put my foot on that step it's going to be OK and that when I step out in faith it will catch me and carry me along. I mean who's ever heard of 'The Great Escalator Tragedy of 1998' or the like anyway?!

It made me think about life in the One. How sometimes it's hard to watch someone we care about scrabble in their fledgling faith just like people forcing themselves to step onto the escalator for the first time. Their particular trial may look easy to me but how can I after my own years of experience in 'escalator riding' frown on their false starts? All I can do is smile, take them by the hand, and step on beside them just like I have to little elderly ladies and children in Metro stations here.

Or how at times I find myself trying to hang on with my own two hands to something I can't really control just like people grabbing the handrails before their feet move. The end result is the same but it makes for a lot more uncomfortable start! At those times I need to, "Just step out," myself!
Posted by Heather at 10:51 AM No comments:

A chance to say, "Awwwwww!"

Behind the main FS building there is a wonderful backyard. Pretty amazing in a place where space is at a premium! 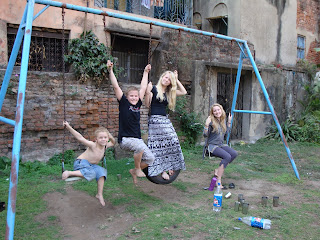 The yard has been cleaned up, a few trees planted, and it's a great place for the women to be outside on breaks, etc. Our kids love it, too, and soccer and cricket matches occur regularly!

A. reminded me the other day of a very sweet connection with the yard. It was Steve and teams that he brought over that helped to clean it up. He himself welded together the swing set------not knowing that HIS kids would only a few years later be playing on it! Isn't our Father good?
Posted by Heather at 7:34 PM No comments:

What was an uncomfortable situation (see post below) to start with yesterday, has turned into good! First of all, relationship with the local police has always been a bit of a challenge. They used to downright harass the business. However, the interaction with the police yesterday was the best ever! A. is on committee with the police sergeant of our district and through her he has grown to respect the business and the motives of those who work there. But he still recommended that we speak to the local area council to make sure that they're happy with our remodeling procedures.

A council representative came by yesterday afternoon to look around and K went to a meeting with them this afternoon. They told us to get on with the project! The man who came yesterday was very impressed with some of the methods being used in the work that he'd never seen before and wanted to know how to do them.

So relationally in the district we're better off now than we were before the bricks fell yesterday and the mob came. And the team can get cracking on some of the more intense stuff again tomorrow!

Postscript:
Just want to add that even through the drama of the previous day we always were aware that Someone else was in control! Situations that we can't control on our own seem to heighten our awareness of that fact. People in our building were a bit nervous but no one was terrified. Two people there had been reading about Nehemiah rebuilding the walls that morning and the difficulties they encountered and immediately felt like it was reassurance that we were also just under attack. Everyone involved is rejoicing that it's clear now that it was allowed for the good!
Posted by Heather at 6:19 PM No comments:

Yesterday we had a chance to grow in the culture. There is a team here of 14 from New Zealand who have been hard at it working on the new building. (They are awesome!) We also had 7 local workers here as well. As we've mentioned, the 'new' building is actually really old so part of the renovations have been repairs on the exterior walls, a challenging thing when there are narrow alleys on two sides with a constant stream of people walking past.

Tarps had been put up on the sides of the building so that should any stray bits of brick wall accidentally break off and come down the wrong way, the tarps funnel the rubble to the side of the pathways and away from people passing by.

This happened yesterday and the tarp worked exactly as planned. Unfortunately, the impression of the people walking past at the time was that they narrowly escaped serious injury. An understandable reaction really! But when a perceived wrong occurs there is no checking it out first here. People react and think, "A wrong has been done so we must do something about it," and mob justice begins.

Steve was the first on the scene and quickly tried to calm 30 screaming men. I was about to take Hannah to her afternoon classes at school but we couldn't get out the front way because of the mob. K quickly arrived from across the street bringing his fluent language skills with him much to Steve's relief. At that point I took Hannah and slipped out the back exit. I didn't like leaving my husband in that situation but knew I couldn't do anything and really didn't want Hannah to be there either. The other kids were already at school.

After we left the mob swelled to about 60 and a few tried to come in the door. Steve sent the team upstairs to lock them inside where we're living just in case. The local workers had escaped out the back exit as soon as the trouble started since they would have been the most likely to be beaten by the crowd. The police arrived about 30 minutes later and when they said to go ahead and clear the rubble from the alley, some of the most ardent protesters turned around and helped!

We were concerned to leave the half finished work sitting without the tarp there for safety but feelings were too hot in the neighborhood to do anything about it last night. Early this morning Steve and K put it back up to the smiles of people walking past. Everything was peaceful and normal again!

An interesting and important cultural lesson! The main thing is to stay calm and in no way be aggressive back. There have been times K. has just stood there and only said, "I'll talk to one of you but not all," until everyone left except a spokesperson.

Most people here have to simply accept so much in life without the ability to do anything about it. It's understandable really why frustration levels run so high and people can become volatile. (Read the above for the rest of the story!)
Posted by Heather at 10:20 AM No comments:

It's been a neat experience lately to have individuals and people here from our home countries. They've mostly come to work on the new/very old building. Now that we're old timers since we've been here all of three months (!) it's been a pleasure to watch the city leave it's mark on them.

One main by product has been a larger world view and a whole heap of perspective. We had a young lady for dinner last night who worked here for a couple of weeks and then did a tour of the rest of the country. She kind of debriefed at the table and it's clear that she'll go back home a person ready to serve way beyond her previous comfort zone. A few minutes ago a gentleman who is here on a team was making comments like, "I'm so grateful for my hard pallet back at the guesthouse because at least I won't be sleeping on the street tonight."