Our Kids and Living Overseas

As we've traveled in NZ and in communication with people back in the States there's been a repeating theme that keeps coming up: "What about the safety and well being of your children?" It's probably the same question we'd ask someone else who was headed in the direction that we are! But just in case it's a question that you've wondered I thought I'd answer it. When I was in ______(where we're moving) last year I asked a lot of questions. I spoke with other mothers who have raised or are raising their kids there. The responses I got were along this line:
-Even though we'll be in a prostitution district it does not make our kids a target since it is only for locals (no foreigner would go there). In fact, their skin color is really a protection.
-Follow basic safety rules like the kids don't go anywhere alone and are not out and about after dark.
-Their kids have done well!

We know that we are meant to do this and firmly believe that when a family is called to do something that there is a plan for the whole family in it. We've been thinking individually specifically about the country we're going to for years. About six months after the kids and I had moved to the States from Fiji, I felt strongly that the girls needed to be back overseas before they left home. That it was important for them personally in the people that they were to become. Even while we were in the States the girls really had a heart for the poor and although they adapted well there, they truly are 'international' on the inside. We are tremendously blessed to feel called as a family.
Posted by Steve and Heather Pound at 10:31 AM No comments: Links to this post

I was telling someone the other day about about what we'll be doing in the country we're moving to and how the children of the women at the business now are now not only out of the cycle of prostitution but that they are going to school as well. The person asked me to explain what kind of changes getting an education meant in practical terms for these kids. I thought it was an excellent question!

The cycle of poverty in a place like where we're moving is something that our western minds have trouble comprehending. And I'm probably not qualified to really explain except from the small bit that I've observed! But I'll try.

Not getting an education doesn't just mean that you have to take a lesser job, it literally means a lack of options altogether. There would be absolutely no jobs whatsoever available to you except something involving manual labor. And with millions of others like you around also wanting those jobs in an urban setting, they would be few an far between. Imagine some of the basic things you learn even in Kindergarten like cutting, pasting, and coloring. If you've grown up with almost nothing to your name and no education, you don't even know how to do that. You don't know how to add or subtract so when you do earn some cash or get some by begging, you don't know if the money you're getting back from the person you're buying food from in a market is correct. You also don't know how much the money in your hand is worth to start with!

Education opens a radically different world even if it doesn't lead to what we would consider a 'good' job in America or New Zealand. But I'll have to expand on this in years to come as I learn and understand better myself!
Posted by Steve and Heather Pound at 12:22 PM No comments: Links to this post 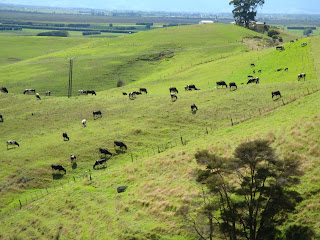 There really should be sheep in this picture instead of cows, but here is an idyllic NZ shot. It's just incredibly beautiful here!!!

The big event of our week was Hannah getting her learner's permit to drive. She studied very hard (with the help of Dad) and had to learn things in meters instead of feet, etc. We're proud of her!

Heather enjoyed speaking at a ladies' breakfast on Saturday morning down in Beachlands and we spoke nearby where we are living on Sunday.

We borrowed a little ATV from Steve's nephew that wasn't running. Steve and the boys have been enjoying the project of getting it back in running condition and it went for it's first test run tonight......... 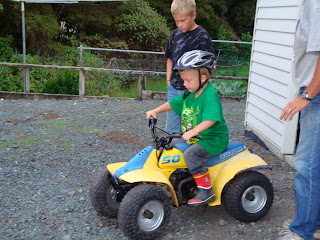 Posted by Steve and Heather Pound at 12:25 PM No comments: Links to this post

We just got back from a great long weekend in Rotorua. Steve spoke to a student body on Wednesday several hours south of here so we went on to Rotorua where we had to be on Sunday instead of driving back here and then back down again. We had a great time doing things like watching sheep shearing, a sheepdog exhibition, riding The Luge (downhill go carts), and seeing the bubbling mud pits and steam that put Rotorua on the tourist trail...and also make it smell interesting!

While the kids were sitting in some hot pools a few days ago we noticed Adam deep in conversation with an older German tourist. I asked him later what they were talking about and he replied, "Oh, you know stuff like where I'm from and how long I'll be here. Oh, and I told her about the prostitutes." Hum, not something you would hear from most six year-old mouths!!!

I can't really criticize what did or didn't come out of his mouth, though. When we were having our garage sale in Phoenix someone was asking why we were selling everything in the house. Without thinking the first thing that came out of my mouth was, "We're moving to _____ to work in a red light district." The look on the lady's face was priceless!!! Hum, Steve probably has his script down but maybe the kids and I should work on one!

It was great to meet Steve's sister Vera when we stopped by her work as we went through her town on the way home today. Hopefully we'll get to have a longer visit soon. Only two more of his siblings to go! 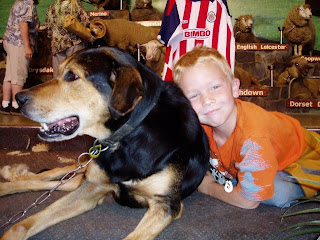 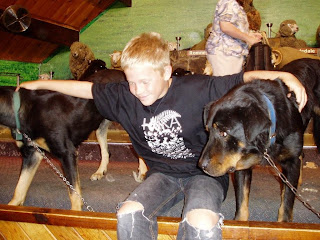 Posted by Steve and Heather Pound at 7:52 AM No comments: Links to this post

Last night we saw the movie 'Slumdog Millionaire' with some friends. The movie takes place in Mumbai (Bombay) and is a rag to riches, good vs. evil story. It is a movie, of course, and not totally realistic, but it does give some good insight into the conditions of the poor in that part of the world and very real social issues (like unrest between different religions, professional beggars, forced prostitution-handled discreetly). It has many great scenes showing the mass of humanity there and just what the place is like. It is disturbing (and has some swearing, mostly in subtitles!) but worth seeing if you want to understand that part of the world a bit or just be challenged to better understand the poor and the outcast. And that there are many, many of them still on planet Earth!
Posted by Steve and Heather Pound at 3:23 AM No comments: Links to this post

We just spent four days in Thames with Steve's parents. It was very enjoyable to spend relaxed time with them and get to know them better! And for them to get to know us. We enjoyed seeing some of the sights of their area with them and introduced ourselves for a few minutes in their fellowship on Sunday. Nana and Pops are now thoroughly adopted by the kids now as well.

We stopped at the doctor's office in Beachlands on the way home yesterday. We didn't tell the kids until shortly before the visit because the purpose was shots in preparation for moving to S.E. Asia. Not too long ago Adam would cry if the word 'shot' was even mentioned. When he got his last shot it took 3 nurses to hold him down! We all had to get Typhoid shots so fortunately the other kids all bravely got theirs first (and the nurse was very good with a needle!) and Adam received his without TOO much trauma. Steve and I each needed several injections so while the nurse was giving us those she discovered that Adam actually needed one more. I called him back in from the waiting room and it was over before he could blink! The other kids say that he bravely walked back out and announced that he'd had another shot. Hopefully this good experience will pave the way for better ones to come. The kids are finished for moving for now but I still have more in my near future.

We had our first language lesson this afternoon. Someone who used to work in a country next door to where we're going and lives in our area has graciously agreed to teach us. I was comforted to learn today that the language is a fairly logically arranged a bit like Spanish or Latin. We have a loooooong ways to go, though!

We're spending this evening with the older brother and sister of the kids who our friends will get to know first in the city we're moving to. They are in university in New Zealand now. It will be nice to meet them and have that connection!
Posted by Steve and Heather Pound at 8:17 AM No comments: Links to this post