Who Knows What's Best? (Continuation of my journey in learning about sheep!)

On Sunday afternoon everyone on the little lane that our land is off of got together to look after our respective sheep in the local stockyard.  A guy who sheers sheep and lives up the road came with his sheepdog. It was a fun afternoon with lots of hard work and a great feeling of community as we all helped each other.

Our own flock has grown from about twenty-five that we got for next to nothing from various people who needed to cull their herds because of dryness and lack of grass earlier in the year, to fifty-four with the coming of lambs.  This is the first time we've brought them all in and have been able to properly count them.

Steve, Aaron and I worked/played hard all afternoon giving them injections, treating them for worms and lice and Aaron even 'got' to help the man who trimmed their backsides put rings on lambs' tails to shorten them for their health and, uhem, on other places making the little future rams into less aggressive creatures.  Aaron as a big, strong boy was also the second sheep dog running around and gathering sheep while Steve drove a quad and I was a deterrent by waving my arms in the air and blocking unwanted escape routes.

And since this was my first experience ever doing something like this, I learned a lot about sheep. 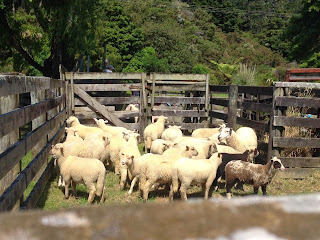 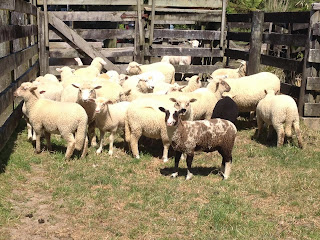 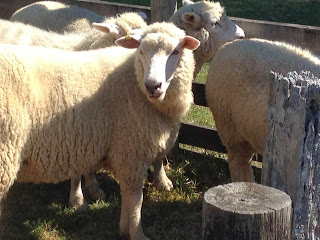 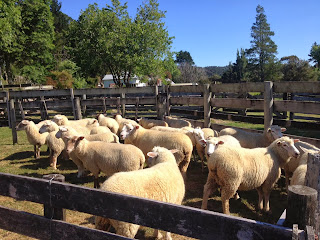 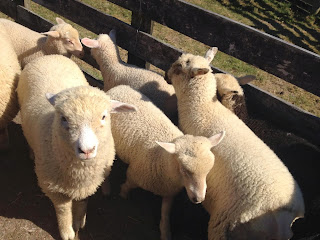 Sheep are really smart---and really dumb at the same time.  They definitely have their own community, their own assumed leaders and their own forms of discipline.  Once they have bonded with them, they are devoted to their young.  They called to each other incessantly when we separated the lambs from the ewes and sorted themselves out in an amazingly short period of time when we put them back together.  While we have a perimeter fence to keep them safe, our sheep usually roam free.  They are curious about and tolerate us when we are around, but they don't know us and don't trust us.

And they don't know what we know.  They don't know about dangers from dogs and traffic, sickness and brush that they can get trapped in when their wool grows too long.  Sheep need a shepherd.

One particularly wily ewe managed to escape capture all together.  She led a small group of six other sheep, including her own twin lambs, in evasive tactics up and down hills until we gave up and decided to leave them for the next round up.  But while we're letting them have their way for now, they are still on our land, under our care and will be looked after in the future.  In the meantime, they're not getting the attention and care that they need.  They're actually hurting themselves.

I understand those words a bit better now!!!

What do sheep long for?  They long for safety and green pastures, but they are also curious and like to roam----thinking that somewhere else might be greener and safer

Sarah Young says, "Much of this world's angst is actually a longing for the perfection of heaven."  We long for somewhere and something better.  It's the cry of our heart.  Deep within us is the knowledge that there is somewhere better.  Somewhere safer.  Somewhere full of joy and peace.

It's one of the Enemy's biggest tactics against us, this recognition that we have of something more. He likes us to think that that 'something' can be found not just in the obviously destructive and perverse, but in the distraction of the meaningless and mundane.  Things that actually steal, kill, and destroy and lead to pain.  Things that only temporarily give any sort of satisfaction and trap us in the thistles and mire.  In distraction and alienation from the One that is more, searching for "heaven in hellish ways." (Sarah Young)

While all the while our Shepherd is there.  Perhaps He's letting us roam for now---but it's costly for us in the long run.  We won't get the care that we need.  We won't be led to the best, safe pastures available here and now.  We won't have the Something More filling our hearts without Him.

This is what He says to His sheep:

"Do not be afraid or discouraged, for the Lord will personally go ahead of you.  He will be with you; he will neither fail you nor abandon you."  (Deut. 31:8)

He is our Good Shepherd.  He is trustworthy and knows what's best for us.  And He will never fail.

"God is not afraid to get his hands dirty.  Whatever kind of mess you're in, he's in it with you."  (Liz Curtis Higgs)  He's not afraid to reach down into the mire and He knows the journey that we need to take even before we do.  And we are sheep.  Every moment we live we are following SOMETHING.  And if we're not actively listening to and following our Shepherd, no matter how much we try to convince ourselves otherwise, we are following someone or something else.  Something that does not have our best interests at heart.  That unlike our Shepherd will not give his life for the sheep.